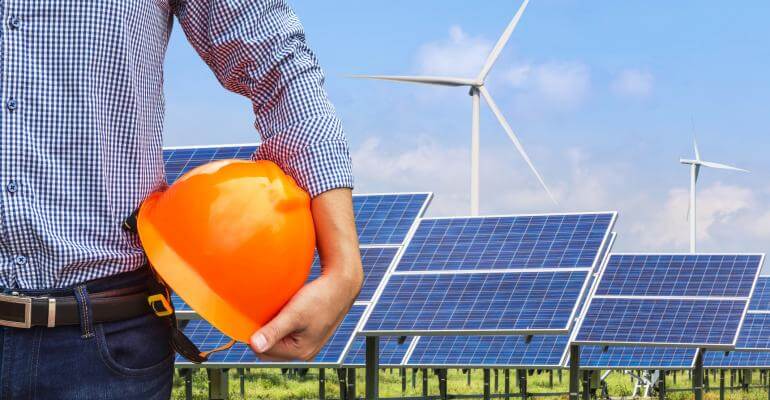 In January the Department of Energy (DOE) published their annual jobs report. The U.S. energy industry employees 6.4 million people. The largest two employment categories are oil extraction and solar, with solar growing the fastest among all fuel types. According to the DOE Jobs Report, by the end of 2016 there were 374,000 American’s employed at least partially by the solar industry. Paralleling the DOE Jobs study, the Solar Foundation recently released their own employment study indicating that 260,000 American’s working directly in the solar industry – one out of every 50 new jobs created.

Although the technology of solar generation is fundamentally different than fossil-generated electricity (lots of up front construction but free fuel) the breakdown of workers is very similar to other electric power generation sources. 37% of solar employees work in installation or maintenance positions, 26% in supply chain positions, 18% in manufacturing and 15% in professional services.

The majority of U.S. photovoltaic generation is utility-scale, roughly 28,081,000 MWh, compared to 16,974,000 MWh of distributed solar generation (note that this is energy generated, not capacity). However, in 2016, over half of the nation’s solar workers were spending the majority of their time working on residential solar. This imbalance reflects the fact that utility-scale generation typically produces more MWh’s per labor unit installed compared to distributed generation. On the other hand, residential and commercial solar provides more value to customers. Power generated at utility-scale facilities costs 5 cents/kwh, totaling $1.4 billion for this energy. Power generated on residential and commercial rooftops cost an average of 10 cents/kwh, but the savings to consumers were even greater at $1.7 billion.

So by all accounts, solar energy is a jobs engine. Although there may be environmental headwinds from the Trump Administration, there are no signs that the economics for solar-generated electricity will falter any time soon. Please Listen Up to this week’s Energy Show as we delve into the technologies and market segments that make up the U.S.’s energy industry.