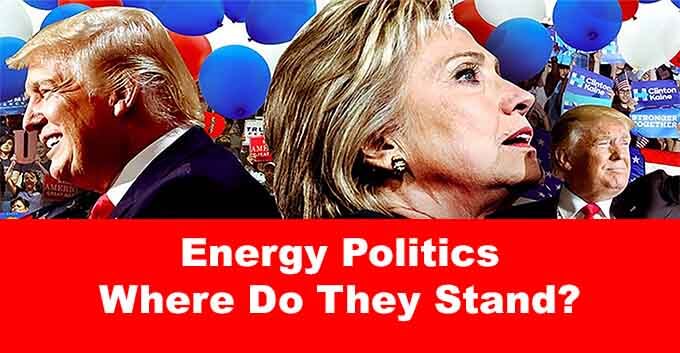 We’re in the midst of a bizarre presidential election. And a global energy transition driven by both economics and climate change. So where do Donald Trump and Hillary Clinton stand with their energy platform plans for our energy future?

Fortunately, the energy platform plans of both parties were published this July, and are very specific about their respective goals for the U.S.’s energy future. Not surprisingly, the republican platform wants to kill the Clean Power Plan (which calls for the reduction in greenhouse gas emissions by 32% by 2025), use more coal (which the platform arbitrarily characterizes as “clean”), ease nuclear permitting, prevent taxes on carbon, state that the environment is too important to leave to radical environmentalists, and solve environmental problems with human ingenuity and the development of new technology. On the other hand, the democrat energy platform plan wants to get 50% of our electricity from clean energy sources in a decade, install half a billion solar panels in four years, generate enough renewable energy to power every home in the country, eliminate tax breaks for fossil fuel companies, and oppose efforts by utilities to limit consumer choices for clean energy deployment.

Hillary Clinton is completely aligned with the democrat’s energy platform plan; it is apparent that she and her team had influence in writing the platform itself. However, Donald Trump’s energy position is at times very different than that of the republican party; he goes with his gut. As a result, it would not surprise me at all that, if he were to be elected, Trump would turn into a big supporter of solar power.

Pretty much the only thing the Republican and Democrat platforms agree on is that we need new energy technologies — but we should not play favorites with particular technologies. Except, of course, with their preferred technologies. Nevertheless, regardless of what the politicians say, the economics of energy generation and distribution will ultimately have the biggest impact on the outcome. For more about presidential energy politics and the specific positions of Hillary Clinton and Donald Trump, Listen Up to this week’s Energy Show on Renewable Energy World.