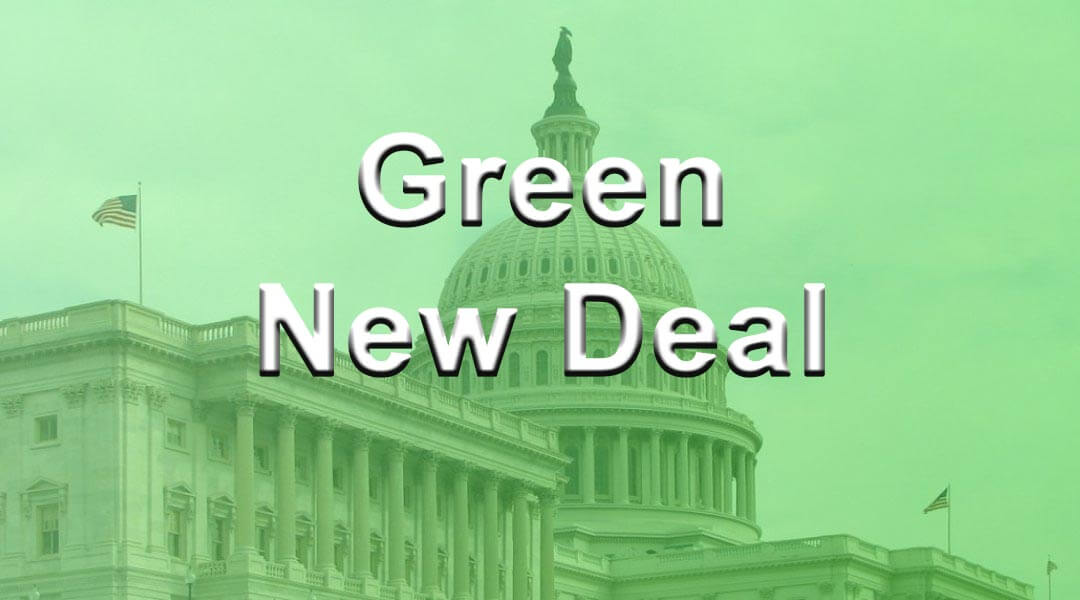 This week’s Energy Show is about the Green New Deal. Candidly, I’m all for the “green” parts, and not so enthusiastic about some of the “new deal” parts. The Green New Deal, formally called House Resolution 109 — 14 pages in all — is definitely a conversation starter. I sincerely hope that it gets our country re-focused on clean energy and good paying jobs for the 21st century.

Basically, the Green New Deal is a set of proposed economic stimulus programs in the United States with a goal of addressing climate change and economic inequality. The “Green” part refers to proposals to reduce the impact of climate change. It deals primarily with renewable energy, energy efficiency, and technologies that reduce carbon dioxide in the atmosphere. I’ve been working in the solar and the energy efficiency industries since 1977, so I believe that an “all of the above” approach gives us the best chance to avert the most negative effects of global warming.

For those of us who coasted through U.S. history in high school, the “new deal” part refers to a set of social policies, economic reforms and public works projects. President Franklin Delano Roosevelt pushed through the New Deal in response to the Great Depression. The Civilian Conservation Corps (CCC), the Civil Works Administration and the Social Security Administration are all legacies of the New Deal — and these policies created jobs for people who needed work. If you go camping in national parks, you may still see log cabins bearing the CCC logo.

Fast forward to 2007 when journalist and author Thomas Friedman coined the term “The Green New Deal.” The concept bounced around and evolved for a dozen years until Representative Alexandria Ocasio-Cortez and Senator Ed Markey released the Green New Deal resolution on February 7, 2019. Please Listen Up to this week’s Energy Show as we discuss both the energy and socioeconomic objectives of the Green New Deal.