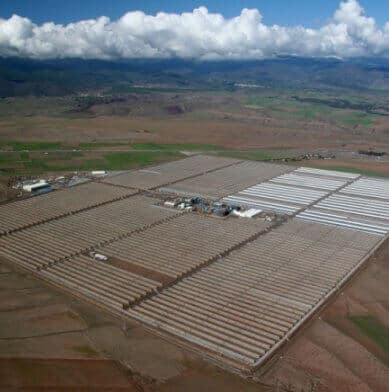 We often talk about smaller solar power systems on homes or commercial buildings. On this week’s Energy Show we are discussing gigawatt scale solar installations. The logic is simple: solar panels are getting cheaper and installation costs are declining. At the same time, utility electric prices keep increasing. When prices go up and costs go down profits can skyrocket – so it’s no surprise that there is a big market for large-scale solar installations.

When I started doing PV installations in 2001 the biggest projects were about 5 MW. Now there are several 500 MW installations proceeding in the U.S., and several 1,000+ MW (a gigawatt) installations are under way in India and China. Solar power plants in the gigawatt range are now being planned in the U.S. To put a gigawatt solar power plant in perspective, it is twice the capacity of most natural gas plants, covers about ten square miles, uses over three million solar panels, and employees thousands of people during construction.

To fill us in on the details of projects of this size, my special guests are Mark Cox and Shola Ashiru with the New Energy Fund II. Mark and Shola have been financing solar companies and projects for almost 20 years. They are currently working on a 1.2 gigawatt project which would be one of the largest systems in the world and the biggest in the U.S.