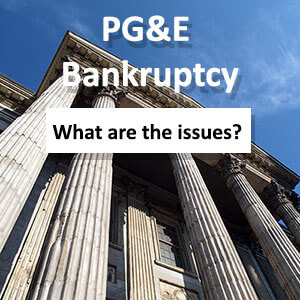 PG&E’s bankruptcy will have a dramatic effect on all electricity users in northern California — as well as utility investors, California taxpayers, and the solar industry in general. Moreover, the bankruptcy of one of the largest utilities in the country is a harbinger of the need to change the traditional utility business model. Not only are utilities experiencing competition from businesses and homeowners installing their own solar and storage systems (for less money), but utilities are also experiencing much greater than expected costs related to maintaining their transmission and distribution services. Devastating fires are more common, people are living in more fire-prone areas, our need for electricity is increasing … and this situation is likely to get worse.

Although PG&E has been my biggest competitor for almost 20 years, they have established a reputation as the best (some would say “least bad”) investor-owned solar utility in the country. Compared to almost all other utilities, PG&E has been ahead of the curve with solar, net metering, energy storage  – influenced to a large degree by a far-sighted California Public Utilities Commission and state government. They are also staffed by committed and hard-working employees throughout their organization.

Nevertheless, PG&E’s financial problems raises substantial issues for solar and non-solar customers alike. Meeting the conflicting needs of taxpayers, electricity customers and investors is a daunting legal and political challenge. To help sort through these issues, my guest on this week’s show is Angela Lipanovich, President and Founder of Estriatus Law. Among the topics we will cover include:

To learn more about the implications of PG&E’s bankruptcy,  Listen Up to this week’s Energy Show with Angela Lipanovich.