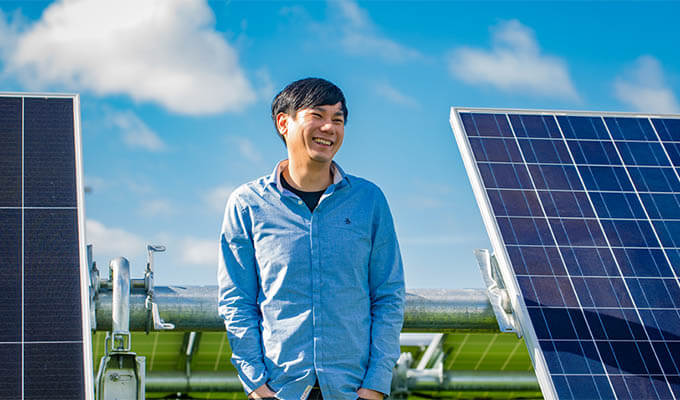 Whether it’s a residential, commercial or utility solar project, contractors strive to install systems that generate the most energy at the lowest lifecycle cost. Solar panels operate at their peak output when the sun is perpendicular to the panel. So for maximum energy collection, tilting the solar panels at the local latitude (37 degrees here in San Jose) facing south is generally best.

Because of existing building structures, compromises are necessary when installing solar panels. Residential systems are generally installed flush to the roof because tilting the panels is unsightly, and the efficiency benefit of tilting the panels is not worth the additional mounting system costs. Commercial systems on flat roofs are generally installed on racking at a relatively low tilt so that more panels can be installed — but almost never horizontal since flat surfaces collect dirt and debris.

But large-scale solar installations do not need to compromise when it comes to tilt angle and orientation. Systems can be more easily oriented due south and tilted at the angle of the local latitude. Taking things one step further, since the sun moves throughout the day, an additional 10-25% efficiency can be achieved if the panels track the sun.

Single axis solar tracker systems generally towards the east in the morning and west in the afternoon. More complicated dual axis solar tracker systems tilt east-west daily and adjust north-south seasonally. Because of the increase in efficiency, trackers have become a standard feature on large solar farms. Essentially, the added complexity of moving parts is worth the big increase in energy output.

NEXTracker was recently ranked the number one tracker company globally. They provide tracking systems and engineering for large utility scale projects all over the world. My guest on this week’s Energy Show is Alex Au, CTO and co-founder of NEXTracker. Alex was one of the pioneers in the solar industry as a key member of the team that developed the first integrated racking AC solar module, and then developed NEXTracker’s core tracking technology.

Please listen up to this week’s Energy Show as Alex shares his insights on NEXTracker, their technology and their recent work in incorporating flow battery technology to help eliminate the imbalance between peak demand and renewable energy production for utility scale applications.