The Real Cost of Electricity 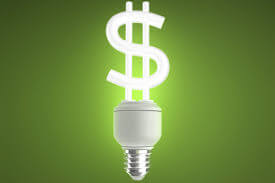 Electricity is a commodity – indistinguishable regardless of the source (all kwh are the same), available from different suppliers and easily transferable. But like many commodities, the cost of electricity varies depending on the location to which it is delivered.

The cost range for electricity in northern California is fascinating. Utilities pay as low as $0.04/kwh for electricity they generate in centralized solar plants. Many companies are installing rooftop solar systems for the equivalent of $0.06/kwh (less for commercial installations). And the average charge to consumers is $0.20/kwh. Why such a big range between wholesale generation costs and retail selling price? First, there are a lot of costs involved from generation to retail sales. And second, some electricity business models are much more expensive than others.

Conventional utilities provide three electricity services: generation, transmission and distribution. Here is how utilities break down their rate components to get to a retail rate of $0.20/kwh:
– $0.10/kwh for electricity generation (usually at a central power plant)
– $0.02/kwh for transmission at high voltages over long distances (those tall electric towers)
– $0.08/kwh for local distribution (that local network of substations, transformers and utility poles)

But why is the cost of electricity so high when generation costs are $0.04/kwh, and rooftop costs are $0.06/kwh? Mainly because monopoly utilities are not under any competitive pressures. A simple comparison between Investor Owned Utilities (IOU) and Municipally Owned Utilities (MOU) illustrates this point. My local IOU charges an average of $0.218/kwh to homeowners; just 5 miles away the local MOU charges an average of $0.115/kwh. IOUs have much higher cost structures; spend hundreds of millions of dollars lobbying regulatory agencies, legislators and the public about why they need high rates; and get a guaranteed profit of 10%.

I can’t think of a single reason why we cannot transition to a more consumer friendly and less expensive way to generate electricity. Please Listen Up to the Energy Show for more about the artificially high price of electricity, and the future of cost-effective and reliable power generation.