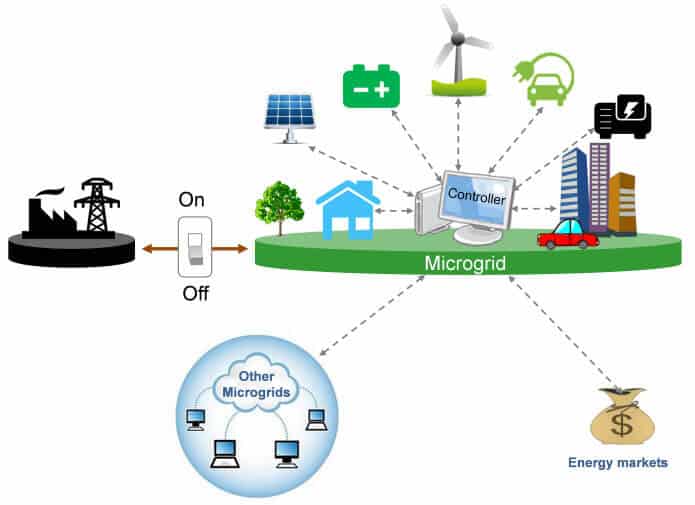 We call our power system an electric “grid” because it is composed of a network of wires that move the power around from node to node – basically a combination of power sources (natural gas power plants, solar farms, nukes), wires (long distance transmission lines and local distribution utility poles) and controls. Microgrids are the same concept but on a much smaller scale.

One example of a microgrid is a complex of buildings on an island. The power plant on an island has historically been a diesel generator, which feeds power to buildings through a smaller network of relatively low voltage wires. More recently these island microgrids have an array of solar panels and batteries providing most of the power, with a backup diesel generator for extreme weather conditions.

New commercial and residential PV and battery storage systems function essentially the same way. These much smaller microgrids provide inexpensive solar power, maximize savings with batteries for when power is expensive, and function in backup power mode if the utility goes down.

The microgrid concept is becoming more popular due to the realization that multiple, linked smaller power grids are more reliable and less expensive than larger centralized grids. Note that microgrids do not carry the high management and investor overhead that utility grids require. These microgrids can also be deployed much more rapidly and take advantage of the latest technology.

Listen up to this week’s Energy Show to learn more about microgrids, and the importance they are playing in the changing landscape of central and distributed energy.