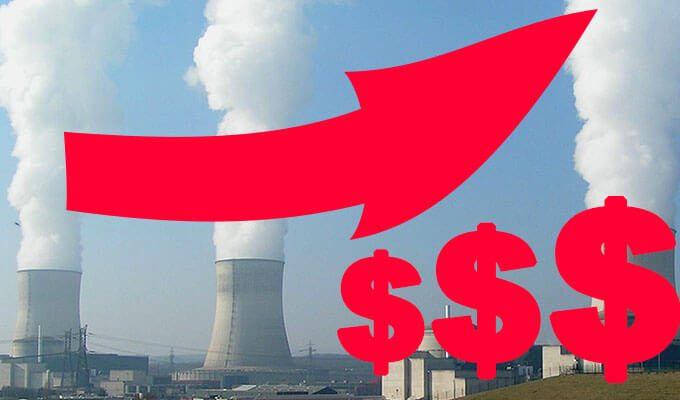 Last month was the 30th anniversary of Chernobyl. The meltdown at this Soviet plant was the worst nuclear power disaster in history. It was a Level 7 disaster on the International Nuclear Event Scale. Fukushima was also a Level 7; Three Mile Island (TMI) was only a Level 5. This nuclear disaster permanently poisoned large parts of eastern Europe. There is a similar contamination situation at Fukushima; fortunately, much less so at Three Mile Island.

New nuclear power technology and safety procedures will hopefully prevent another disaster (although that’s what we thought after TMI). But what happens at a plant that isn’t crippled by a disaster? Surprisingly, even cleaning up existing nuclear plants is outrageously expensive. Ever wonder why every electric bill has a line item called “Nuclear Decommissioning?” It costs about $750 million to shut down existing plants in a process that can take 20 years or more. Around the world, nuclear plant operators have budgeted over $1 trillion dollars to clean up existing nuclear reactors (think about how many solar panels and batteries we can buy for $1 trillion dollars).

Once they are up and running, the economics of nuclear power plants are pretty good. But they are expensive to build, expensive to decommission, and outrageously expensive to clean up after a disaster. Compare that to a “solar spill” – which is basically a very sunny day. For these economic reasons, from a utility’s perspective the pendulum has swung completely way from nuclear power towards solar. Please join me on this week’s Energy Show on Renewable Energy World as we delve into the long term costs of nuclear energy.