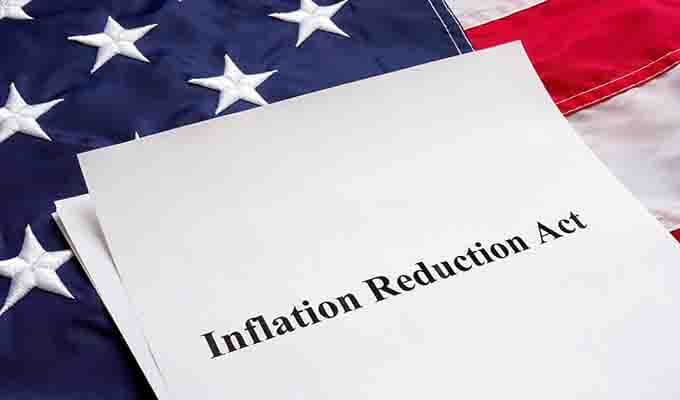 This week’s Energy Show podcast is about the IRA. Even if you’re retired or Irish, the inaptly-named Inflation Reduction Act is the most important legislation for clean tech ever. We’ll talk about the big picture of U.S. energy generation and use, and then delve into how much homeowners can save with the incentives in the IRA.

I downloaded all 755 pages of this bill so I could check the legal details in the fine print (DeVinne 18 pt). Congress threw the entire clean tech kitchen sink into the IRA, along with some much-needed social programs. There is no doubt in my mind that the IRA will accelerate the transition away from fossil fuels – particularly as homeowners electrify their homes and stop using gasoline and natural gas (Converting a House to Zero Net Energy).

The IRA has the potential to reduce U.S. emissions by 42% by 2030. Nevertheless, ten years from now the climate will still be hotter. Moreover, accelerated utility investments in electric generation infrastructure will likely double electric rates, accentuated by utility efforts to recapture losses from stranded fossil fuel assets (Energy Prices Through the Roof). It will take an all-hands-on-deck effort — on a worldwide basis — to deploy the necessary technologies to reverse global warming. The IRA is just a start for the U.S.

Here is a summary of the key homeowner provisions of the IRA. In calculating costs and savings for average homeowners, the following assumptions were made: 1,000 kwh electricity/month, 640 therms methane/year, 1,000 miles driving/month, California EV2 electric rates, and suburban California construction costs. Where appropriate, I’ve included links to previous Energy Shows that cover many of the technologies in the IRA.

Scalable commercial energy technologies will probably reap the lion’s share of total government support in the IRA. Utility-scale solar and stand-alone storage will grow even faster than current trends. Not only are there direct incentives, such as the extension of the ITC, but there are also depreciation, kwh production, domestic content, preferential siting and transferable credit incentives. Note that commercial projects over one megawatt require prevailing wage workers, which will be a boon to unionized employers.

Renewal of the solar ITC, both for commercial and residential projects, takes place immediately upon the IRA’s signature by the president. Most of the non-tax provisions — such as incentives for heat pumps, electrical upgrades and energy efficiency – will be administered by state energy offices. So expect paperwork, complicated as always, to become available sometime in early 2023. Incentives for carbon capture, nuclear power, clean hydrogen, etc. will be administered by the Federal Government with regulations developed within one year of the IRA being signed into law.

Was Uncle Joe distracting almost everyone in Congress with talk of Executive Orders for clean technologies while Senators Manchin and Schumer were negotiating this legislation in secret? Perhaps we’ll never know. Nevertheless, the combination of clean tech and fossil fuel incentives in the IRA strikes a reasonable balance between winners and losers.

Bottom line, the Inflation Reduction Act is the biggest clean technology effort by the federal government, ever. It will help the U.S. accelerate a transition away from polluting fossil fuels, reduce greenhouse emissions from the U.S. by 42% by 2030, and save the average homeowner who electrify their homes about $7,500 in annual energy costs. For more details, please listen up to this week’s Energy Show, and click on the relevant links for more details about each technology.